Ken is the smiling silver haired lottery system creator from 'down under' in New Zealand.

He's best known for creating the 'Silver Lotto System', although it's been through a number of name changes and improvements in the 20 years or so that it's been available.

Many moons back - the early 1990's - he started selling his system from little adverts placed in a New Zealand newspaper. Back then it was known as the 'Lotto Link', and over 3,000 happy kiwis bought a copy.

When the internet was then invented Ken decided to try selling his book online instead. That's when he titled it 'The Honest Lotto System' which you may have heard of. It was called that for a long time, right through from 2001 up until 2007 when it got it's current (and somewhat better) name.

Ken himself still lives in New Zealand - in Wellington, at the foot of the countries North Island - and writes regularly on his blog about the lottery in general.

Many of you will also know that he has a bit of a love affair with high end cars. Not your crazy sports cars like Bugatti, but generally your classy luxury comfortable sedans. Although he is considering a Tesla.

His collection currently includes an Aston Martin Vanquish, Bentley Continental GT and a Mercedes SL500 convertible. Not a bad collection. And that's not to mention the cars he's owned over the years and upgraded.

Here he is caught taking the Vanquish out for a ride:- 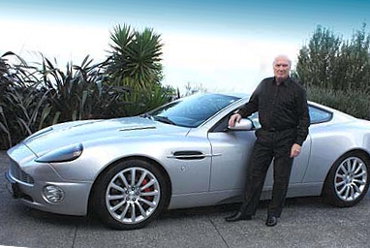 So Ken is basically well off (a 'Millionaire' as he puts it), and enjoying his retirement and cars. He's also a guitarist, happily married (40+ years) and has 4 grown up children.

And one of my favorite fun facts about him, is that he doesn't admit to many millionaire eccentricities - except one. He enjoys a new pillowcase for his bed every single day :-)

You can read my full review of the Silver Lotto System here.