There's two things I need to point out about this system up front:-

But putting aside the dodgy positive reviews and sly name similarity (both of which are legally questionable), let's take a look at what the Lotto Guy Lottery System actually offers.

This system is published by Brent Morand from Calgary in Canada. It's basically a number picking strategy, that borrows heavily from other systems (e.g. Gail Howard). There is no software or manual, as this is basically a one page suggestion on how to pick numbers. In it's favor, this does make it easy to understand!

So How Does It Work?

To access the system you log-in to a fairly crude website (built on a free hosting website!) which gives a table suggesting how you should pick numbers to build combinations. 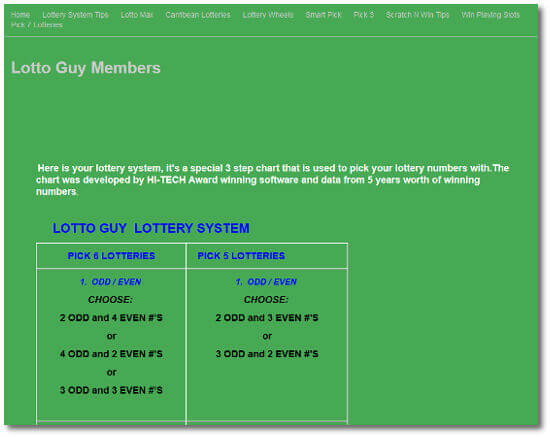 So the method basically is as crude as 'pick so many odds and evens, then so many highs and lows, then make sure they add up to a sum that falls within a certain range'. That's it. It doesn't matter which country you are in, what game you are playing - only the range of 'sums' changes slightly depending on if you are playing e.g. Pick 5 or Pick 6.

There is no explanation or justification as to why picking numbers in this way would be any better than buying a quick pick. There's also no evidence to prove this method helps, or to back up the 'regular winnings' that the author makes claims for.

So What's Wrong With This Approach?

Firstly, it's quite tricky to meet all three of these 3 rules. You end up having to go backwards and fowards adjusting your numbers until they meet all the magic requirements. It's the kind of task that computers were invented for, but there is no software provided to do it. You're stuck with pencil, paper and frustrating trial and error.

The main problem however is that this approach attributes patterns to past results that a) may not even be there, and b) there isn't anywhere near enough data to draw these kind of conclusions from. Oh, and c) they are the wrong conclusions anyhow.

Take the idea of picking numbers according to the sum that they add up to. This was originally an idea published by Gail Howard many years ago. The problem though is that it's wrong. Gail however sold a lot of books over the years (did you know she never actually won the lottery though?) so the myth has persisted as being 'true' when it simply isn't.

It is true that there are more combinations in a lottery game that add up to certain ranges of sums, but that doesn't make any difference to the chances of the individual combinations being drawn. Who cares if your combinations and the winning numbers both add up to a total of 150. They can still be completely different numbers with none matching at all yet still have the same sum. I've never seen any game that paid out even $1 for adding up to a sum of 150..! Have you?

The same thing applies to those odd/even, and high/low numbers too. There is no proof at all that picking in this way improves your chances of winning anything. Logic actually proves the opposite - picking this way does not improve anything. There are lottery systems that work, but they don't work by fundamentally misunderstanding the math.

But Isn't This University Tested?

That's what the author claims. Although he now clarifies that claim by revealing that it was a 'class project' at University! Which is of course a dramatically different thing altogether.

Now I don't know about you, but I happen to know that any math or stats related class at University level would quickly rubbish this system completely. So I find it very hard to believe this was a University level class (although bear in mind the author makes no claim to having passed that class, or got anything better than a 'Fail' for this project..!). Even a high school math teacher would be awarding a 'D' at best - and that would be a generous recognition of effort whilst pointing out that all the conclusions are incorrect.

This is all made even worse by the big claim of a '30% increased chance of winning'. This succinctly reveals the authors lack of understanding of basic math. Apart from seemingly being plucked from the air, a 30% increase is nothing to write home about. If I normally buy 1 ticket, but instead buy 10 tickets - that's a 10 times increase in my chance of winning. Which is 1,000% better. Makes 30% sound a bit silly really.

What Else Do You Get?

There are also some other 'bonuses' included with the system. This consists of a page of 'tips', some of which are slightly useful but most of which unfortunately are not. For example, in one tip you're advised to stick to the same numbers but in another you're told if numbers you are playing come up to exclude them from the next tickets you play. For one, which is it. And for two, numbers do not magically become less likely once they are drawn. If you roll a 6 on a die does it make 6 less likely the next time you roll it? Are there now only 5 sides on the die..? 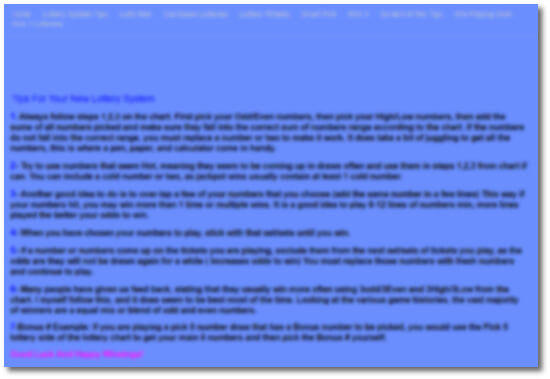 There are also some other tips for scratchers, and Pick 3 but the quality continues in the same vein as above. Then there are the free wheeling systems promised in the original sales pitch... Only there aren't any actual wheels provided because all the author does is link you to somebody elses website where they are freely available anyway. I don't know about you but that feels a bit dishonest to me.

If you were hoping for some good information or strategies on how to play, then this is definitely not the system for you. I'd suggest Win Lotto Systems which includes a manual that actually includes useful AND correct information as well as some software for not much more than the cost of the Lotto Guy System.

It's pretty cheap at $19.95 (although it used to be $9.95 for the exact same thing). But then you really don't get much for your money. Unfortunately what you do get is mostly incorrect, so sadly I couldn't find enough of value to warrant even the old price.

The only thing going for this system is how basic it is. There simply isn't anything here worth buying, despite the low price. The author fundamentally doesn't understand the math of what he's selling so there is nothing in the Lotto Guy Lottery System that will improve your chances of winning. Sadly it would seem the only reason anyone is buying this system is due to the dodgy positive reviews online and the similarity in name to a more respected website.