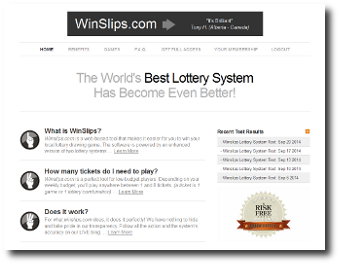 Winslips is the all new and improved version of both the popular 'Inverted Lottery System', and the lesser known 'One-Ticket System'.

But you can't buy either of those products now. Why?

Because this new one is supposed to be better than both of them put together - so let's find out if that's really true.

So What Is It Exactly?

It's basically software to help you pick better lottery numbers. But it promises 3 very important differences:-

So as I review how it works, I'll be specifically looking out for these 3 things -- and holding it up to these promises.

How Do You Use It?

The first thing to point out is that Winslips works entirely in your web browser. That should mean you can run it on pretty much anything these days - including your smartphone. I didn't test it on a phone but the layout is pretty simple so I can't see any reason it wouldn't work on any device with a half decent sized screen.

Here's what the main screen looks like on the inside: 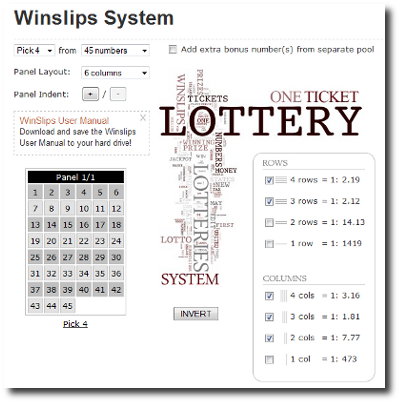 And that really is pretty much all of the software right there. It is actually very simple to use (but there is a really good clear manual that will walk you through the entire process anyway).

All you need to do is set your game type using the drop down menus. So if you're playing a 6 balls from 49 game, you simply choose Pick 6 from the first menu and then 49 numbers from the second. Then you push the 'Invert' button - and that's most of your work done!

So it certainly lives up to promise number 1 so far. This is not complicated!

The real power of the software is hidden behind the scenes of course, but what it does when you click the 'magic button' is create a number of panels - just like you would see on the normal playslip you fill in when you want to buy a lottery ticket. The only difference being, some numbers are missing from each panel. Like this:- 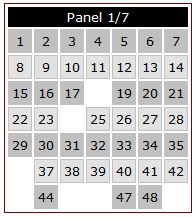 Here's where it starts to get clever.

What Stefan has done is take his extensive experience of creating lottery software, and identified some key patterns for each of the main types of lottery games. It apparently took him over a year of calculations to achieve. But what he's done is come up with a way to reduce the number of combinations you are up against, by using clustering together with exact combinatorial grouping. That is, removing those combinations that are unlikely to be part of a winning cluster of numbers.

In use what this simply means is that each panel is different as each has certain numbers missing. Which ones is the 'secret sauce' of the software of course.

The critical promise (and the very clever maths bit) being that despite removing all the bad clusters of numbers -- all the winning numbers are 100% guaranteed to be in one of the panels generated. This is what Stefan refers to as his "100% fail-safe" method. (Note: the number of panels it creates depends on the type of game - but it's normally 4, 5 or 6)

So what does this mean to you?

It means a significant reduction in the number of combinations. And less combinations means a better chance of winning.

The next step in the process is to generate the actual combinations you are going to play.

And to do this, you simply click once for each panel and a combination is created lke this:- 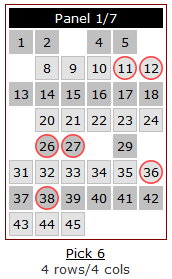 This isn't just a random quick pick though.

What the software is doing here is examining the probabilities of numbers appearing in the same columns and rows.

To put it simply - do you think there is more chance of all 6 numbers appearing in 1 row, or of them appearing across more than 1 row..?

(Why didn't we think of this before? Because we're not Stefan!)

So the software automatically works out all the probabilities for numbers falling into 1 row, 2 rows, 3 rows etc. Then does the same again for the columns. Then using only the most likely rules from all of this does it then determine a good combination for you to play.

Obviously you don't need to know how any of this works, or even care what the calculations are. They are all just done for you in 1 click, and it takes a mere fraction of a second.

How Many Combinations Do I Have To Play?

You have a choice here. Stefan recommends that you generate 1 combination from each panel - which means you will typically be playing 5 or 6 combinations. But it could be as many as 8 depending on the game.

But if even that is too much for your budget, then Stefan says to simply use 1 panel and play 1 combination. It's obviously not as good as playing 1 from each panel, but it's a whole lot better than nothing!

So at a maximum cost of 8 combinations to play each draw, this certainly meets it's promise of being cheap to play.

What Games Does It Cover?

You can use Winslips for pretty much every Pick 4, 5, 6 and 7 game. And that includes all those games that have extra balls drawn separate to the main numbers - so it works for games like Powerball, Mega Millions and EuroMillions too.

The price depends on how long you want access to the software for. Membership starts at $21.95 for 1 month access, but you can also choose 3 months, 6 months and 12 months access which works out a LOT cheaper overall.

NOTE: These are all one-off fees, not subscriptions. You only pay again if you want more access. And don't forget you don't need to change your numbers.

So if you think you will stick to the same game AND the same numbers for the next year, just get 1 month access. But if you think you'll probably change numbers a couple of times over the year, or want to make sure you're always using numbers from the latest version of the software, then get 12 months access as it will save you a ton of money in the long run.

The thing I like most about Winslips is that it delivers 100% on it's "easy to use" promise. I've never seen any lottery software this simple to use before. Period. And because you keep playing the same numbers, you only need come back to the software again if you decide to change games, change numbers, or want to create numbers using the latest update of the software.

And it also delivers fully on the promise of being cheap to play. This is even cheaper to play than the Silver Lotto System and that's pretty cheap compared to many systems!

The third promise this system made is that of being "good at what it does". It certainly doesn't promise anything ridiculous, which is reassuring - this is about reducing your odds, not plucking jackpots out of thin air! But it's difficult to fully evaluate Stefan's cluster reduction techniques, partly because it is the 'secret sauce' of the software -- and partly because my math simply isn't anywhere near as good as a professional like Stefan.

So let me put it this way - I certainly couldn't find any gaps in his promise that the winning combination is in one of the panels created. It was, for every single draw I tested over. Stefan also publishes evidence of this on his site, twice a week for every single US Powerball draw - and that's for one of the toughest games to win!

Bottom line - I like this a lot. It's dead easy to use, it's cheap to play. And it comes from a well known name who has been doing this kind of stuff for a very long time now. I recommend giving it a try.

Use the link below to get a $10 discount coupon when you buy a 12 month subscription :-)

LATEST: Sorry, Winslips is no longer available - Stefan is no longer selling it. Try the Formula 1 Lotto software or Win Lotto Systems instead.